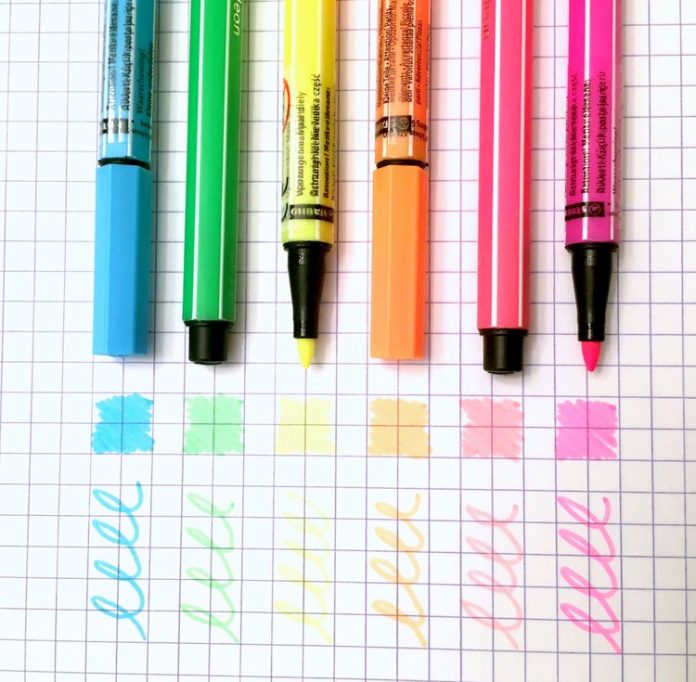 When disaster strikes, and by disaster, we mean when your pen runs out of ink, you need to think fast. So, first thing is first, it’s important to stay calm. Panicking will only make the situation worse.

Of course, we’re being slightly sarcastic but on a serious note, it’s still incredibly annoying when every single one of your pens run out, despite always keeping the lids on them and you’re getting sick of just throwing your pens away that clearly have ink in them, so, you need a solution, and we have one. Next time your pen runs out before throwing it away, why not try these 5 steps.

If your pen has dried out, one of the first steps you should take is soaking the pens in hot water. This will help to dissolve any dried ink that might be causing your pen to stop working.

Simply blowing a little air down the pen could then perhaps force ink to the end of the pen and perhaps get it to work.

If that doesn’t work, you should then remove the dried ink that is clogging up the nib by rubbing your pen on the bottom of your shoe, a damp cloth or an emery board.

You need to be care when doing this step as you could melt the pen and ruin it. Therefore, when doing this, gently hold your pen tip to a lighter flame for just a few seconds to try melt the dried ink in the ballpoint pen.

Use a straightened out paper clip and a drop of nail varnish remover to clear out the dried ink clogging up the ink cartridge.

If you’ve tried all those steps and your pen still won’t it might then be time to invest in a new pen, but at least you know, you’ve tried everything.

Sharpies are a must have in any family household, how else are you going to label your children’s names in their school uniform?

But Sharpies can be ridiculously expensive. Needless to say, if you’re living on a budget, it’s not your top priority to go out and buy new Sharpies every time one dies. But it may be that when your Sharpie “dies,” it’a not really gone for good. When a Sharpie dries out, it’s rare that the ink in the marker is actually gone. More often than not, the tip of the marker is simply dried out. This may stop the ink from coming out, but it doesn’t mean there isn’t ink in the marker! So here’s how can you refresh your Sharpie and make it good as new?

2. Let it sit until you see a little ink running out into the alcohol. Then, cap your marker and let it sit for 15 minutes before using it again.

3. The next time you put pen to paper, your Sharpie should be working perfectly! Although a fine-tipped Sharpie is pictured here, this trick will work on thicker Sharpies and other brands of permanent markers, too.

4. Make sure, when you’re letting the tip soak in rubbing alcohol, that you put something behind the marker for it to lean on. Chances are, it’s not going to stay upright all on its own.

5. This trick won’t be able to fix ALL markers. Some Sharpies are just too far gone to save and if you’ve revived one marker a few times, the ink may actually be gone after a while! But for a quick fix, this is the perfect tip to save a perfectly good Sharpie from the trash.

For water-based markers (like kids’ markers) the same technique can be applied to reviving them, only soak the tip in water rather than rubbing alcohol. Basically, you’re injecting liquid back into the dried-out tip with whatever suits the type of marker better; water-based markers will require water, but permanent markers require rubbing alcohol better because of their alcohol-based ink.

Highlighters are a staple for lots of students, teachers and anyone else hoping to remember an important piece of written information. However, carelessly leaving the cap off a highlighter can lead to the tip drying out. You can bring the highlighter tip back to life — providing there is still fluid in the marker — with a simple dousing in rubbing alcohol.